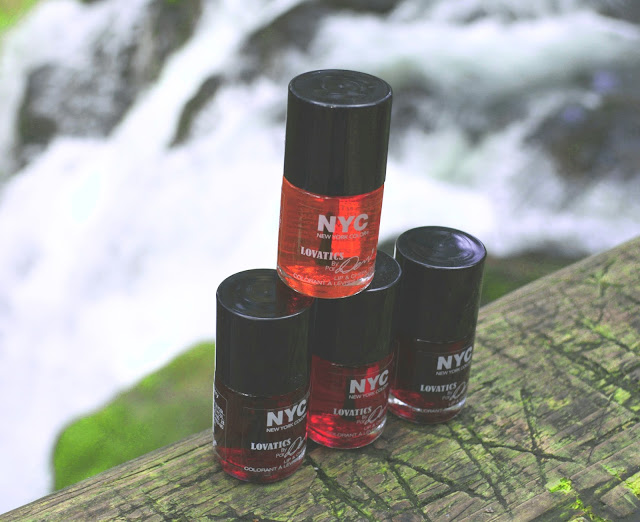 Hello!
I found the entire NYC Demi Lovato Lovatics Tints at my local drugstore on clearance for 50 cents a pop, and even though I rarely use blush, it was too good of a deal to pass up!
I got the shades Cheeky Berry, Cheeky Pink, Cheeky Strawberry, and Cheeky Red (such creative names haha).
These are marketed as a lip + cheek tint, but I didn’t take any pictures as a lip color because these are so pale. Cheeky Berry, which is the darkest of the bunch, is hardly noticeable after application so I felt like pictures showing a before and after would be a waste.
On the other hand, they are absolutely lovely as blushes! This may be in part due to the fact that I’m incredibly pale, but being so pale makes it hard to find blushes that don’t look garish, so I really appreciate that they’re blendable and sheer.

It’s shocking how pigmented the liquid appears before it’s blended into the skin, so I filmed a clip to show off how blendable it is. This dries fairly quick so you have to move quickly after brushing it on. As long as you don’t dilly dally too long, it’s super easy to work with.

What are your thoughts on tints? Are they worth it, or is it better to stick with traditional powders? Let me know in the comments!

link to How Much Should I Be Spending on Skincare? How to Stop Overspending

It can be extremely easy to overspend on skincare nowadays with single products being priced at $60-120 a pop! There is no magic number I can throw at you, but I can break down the numbers so you...

The ingredient list on the back label of a skincare product might look like ancient Greek to the uneducated eye when you first try to decipher your product, but we're going to change that! I'm going...

I’m a skincare and beauty nerd that watched way too many episodes of MythBusters in my impressionable youth which lead to the creation of GirlChickBetty. I love to break down skincare myths and truly put products to the test!

GirlChickBetty is a participant in the Amazon Services LLC Associates Program, an affiliate advertising program designed to provide a means for us to earn fees by linking to Amazon.com and affiliated sites.